It’s Chinese New Year on February 19. The Spring Festival is regarded as the most vibrant gift giving and shopping season in China, and therefore one of the major push for many leading brands. Many global advertisers follow the same old formula year after year, while others try to break away from the norm and do something different.

Pepsi curated a “crowd-sourced video” inviting consumers to submit 15-second videos via Mei Pai 美拍, a local mobile video app, to form a tribute to family reunions. The crowd-sourced final cut video will be eventually simulcast on the big screen in New York’s Times Square, symbolically bringing something local to a global stage. At the same time, the “Bring Happiness Home” themed promotion will deliver over 2000 postal parcels to help the mothers in the remote mountainous regions get through the cold winter days.

Apple, on the other hand, had taken this opportunity to unveil their first TV commercial produced specifically for the China market.

It has been an epic few months of localization activities for Apple. Recently they have opened five new stores timed right before the Chinese New Year. Four of the stores are in brand new cities for the brand including Zhengzhou, capital of central China’s Henan Province, West Lake in Hangzhou, Zhejiang Province. In each location, they have strategically partnered up with local artists such as Wang Dongling and painter Yangyang Pan to co-create signature murals inspired by each city for the local store. 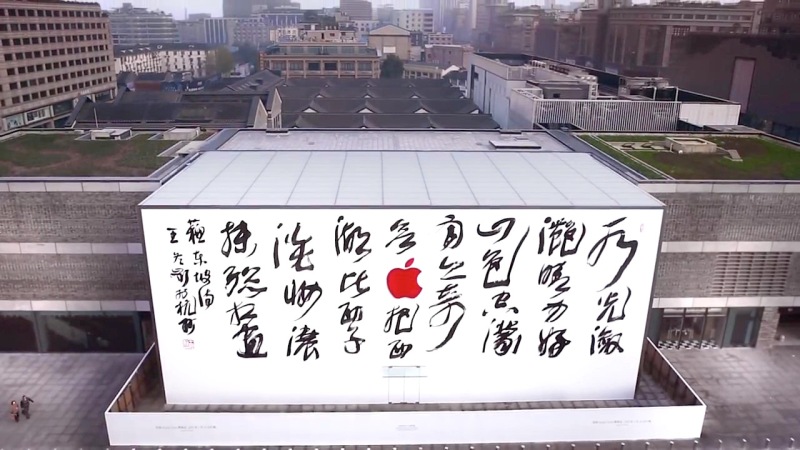 The TV commercial for Chinese New Year has been met with mixed criticisms. Directed by Ann Hui, best known for her films surrounding the topics of social issues, and cinematography by Christopher Doyle, a key collaborator in many films by Wong Kar Wei. However, you can hardly trace their signature style in the production. One of the main reasons, perhaps, is because they had to follow the tight guidelines imposed on the production – it has to be “consistent” with the global version. The story bears an almost identical storyline to a commercial entitled “The Song” released in the United States over the Christmas season in December 2014.

Even though it is by large a just a localized version, but at the very least, there is a strong and relevant proposition. The storyline cleverly positions the brand being the bridge between the younger generation and the old, and technology plays a role in connecting the emotions across generations.

Different brands tend to adopt a different approach to localize brand messages for local market. In the old model, creating the localized version often involves so many levels at the client side. Depending on the category of the product, it could involve anyone from the local marketing team, the regional marketing team and of course ultimately the global brand team. During the process, any form of innovative thinking will be filtered, reduced, modified, tweaked, abandoned, shot down, reinterpreted or misinterpreted.

Any creatives who had worked within international network agencies on global brands will know the challenges. Fortunately, some global brands are now doing it differently.

Apple now adopts a centralized approach – global ideas being conceived centrally, while implementation and production being done locally. Local content are developed following the global guidelines. Pepsi has adopted a more locally driven approach, leveraging current consumer trends that resonate well in the local market. While brands like Microsoft, they have established processes such as “global-readiness audit” to make sure the ideas and executions can travel well.

No matter which strategy you decide to adopt, one thing is for certain – if you want a cohesive global brand at all, you do need to think global at the time when the idea was conceived. The key to success is to create a truly global platform, which could be so fluid that it allows local interpretations without losing its integrity.

Most global brands prefer the 80-20 ratio of global-local content – to adopt 80% of the content centrally and globally, and allow local market to reiterate and adapt 20% of the content to enhance local relevancy. I personally advocate the 70-20-10 model in which 70% of efforts focus on delivering quality global communications riding on universal truth, 20% on pushing the boundaries to contextualize it with local nuances, and 10% on ideas and approaches which are unproven but could transform the marketplace in each local market.

Which model works best for you highly depends on how you structure the global-local team, and where you put the right kind of resources.

It’s also not easy to motivate creatives to get all excited to work on adapting global ideas, but you can create the space and environment to allow creativity to grow. Here are a few tips:

I wish everyone a prosperous year of creativity.

There is a subtle difference between brand pushing messages to consumers, and letting consumers discover what the brand represents.

Recently, a giant pavilion in the shape of a Louis Vuitton suitcase emerged on Moscow’s Red Square. The construction is part of an exhibition called “The Soul of Travel”, marking Louis Vuitton’s 150th anniversary. The blatant display of branding in a conservative culture didn’t go down well.

In fact, consumers in parts of the world where branded goods used to represent status are now turning towards more subtle expressions of taste. China is one of them, and luxury products have already seen heavily branded merchandises slowly losing their charm.

Brand presence has to be more intelligent, subtle, understated, and localised.

Brands are also becoming more like publishers. Creating content around the brand needs more than just one dimension. To be involved in popular culture, particularly the creative side, gives brands the opportunities to contextualize the brand stories, and build key components of their brand promise. It can also give them “currency” and relevance in specific local markets.

There’s a trend that resonates this movement – brands are making the most of retail space. Not just as a place for transaction of sales, but also as a place where they can project a multidimensional character of their brand.

The beauty and make up company Sephora created a pop-up museum concept in New York entitled “Sensorium” in 2011. The category of perfumes has always been solely relaying on glossy print ads and images, but the interactive journey of the setting of the “Sensorium” space introduces consumers to a new way of appreciation of fragrance. All of a sudden, beauty is not just skin deep, but adds a layer of intelligence to it.

In September this year, Starbucks opened two flagship stores in Beijing. They are not ordinary flagships, they are brand-defining establishments. One, located at Beijing’s glitzy and busiest Kerry Centre, is a 4,000 square-foot, two-story “coffee tribute”. The temple-like space features a giant, bold, Starbucks siren icon on the exterior of the building that illuminates at night. The other “eclectic” version, located in Sanlitun, is a 24/7 operation. Featuring ceiling-to-floor glass windows with a special club on the second floor called “Club 1971” that features live music by local talents on weekends. The Chinese Millennials are in dominance. It also reflects the young Chinese growing up in the one-child system with a strong desire to connect with their brothers and sisters outside the family.

In Shanghai, Under Armour opened its first store in China by blending art and science, presenting the Chinese consumers a sensory journey into the brand. The “retail theatre” is located in the new Jing An Kerry Centre, and designed by Marc Thorpe Design in collaboration with HUSH Studio.

China has a complex relationship with sports, although Chinese athletes are winning more medals in the global stage, but still relatively few Chinese has a personal relationship with sports. Global brands such as adidas adapted their strategy by creating two different divisions, on the one had is their flagship sports performance line; and on the other hand, capturing an aspect that translate sports into lifestyle and fashion. The result is, sub brands such as Originals and Y3 had been successful through the halo effects and the connections with its sports performance heritage, effectively crafting out a strategy that is relevant in the local market.

But developing local product strategy is not enough anymore. The idea behind the Under Armour’s “retail theatre” is to open up the minds of the consumers by redefining the notion of training – not as a pursuit of profession in sports but working to achieve physical greatness. It elevates the proposition from a physical one to an aspirational one.

In an age where authenticity of the brand is so critical that it defines what the brand is all about, by presenting consumers a production quality of epic scale it breaks down the boundary between the physical space and the digital, it will certainly triumphant over any content people get just from small screens.

Creating unique brand experiences is one of the most powerful, immersive means of building a brand. Ultimately, it boils down to making it relevant to local consumers while enabling sharable conversations.

A few campaigns that had been launched recently had caught my attention. Not only because of its brilliant idea or execution but coincidently they all seem to have been inspired by visual arts.

Sony’s ‘Soundville’ brilliantly turned Seydisfjordur, a small village in Iceland, with a ‘sound installation’ for a week by putting up speakers playing music from the likes of Death In Vegas and Bob Dylan. The clever thing about this campaign is that they have chosen such an unusual setting to convey the message, there is a poetic effect to it. The result had encouraged the audience to focus on the message rather than influenced by the familiarity. Alienation all of a sudden becomes so approachable in this case.

Volkswagen’s ‘Theory of fun’ outdoor stunt had converted a set of steps at the Odenplan subway station in Stockholm into working piano keys. The campaign built on the VW’s brand personality of the joy of driving and encourages people to take the staircase instead of the escalator. It has often been said that commercials riding on emotions rarely transcend cultures, but in this case I think they have absolutely nailed it. It can be understood and appreciated across cultures and can also be easily adapted creatively using local site specific executions.

The recent CCTV commercial advocating ‘The power of the brand’ had used ‘ink animation’ to illustrate the progress of modern Chinese culture. It is a brilliant video art on its own. Not only it is visually stunning, it also demonstrates that traditional cultural elements can be translated in contemporary context too.

With the impact of visual arts globally and the consumers’ growing interests in the appreciation of artistic projects, visual arts could be one of the powerful tool in creating globally effective communication.