Great global ideas do not come about easily. There is always the challenge when an idea works really well in one market, but does not resonate with the consumers in another. There is also the misconception of consistency and the danger of adapting global ideas for the local market without taking into consideration of the context, focusing more on the similarities and not the differences.

Traditionally, the narrow definition of a great global idea means the ability to adopt the same message and adapt it for the local market, maintaining ‘brand consistency’ and maximise cost savings. While this is still true in the broad sense, it is no longer enough. Not only the guiding message needs to be adapted, or transformed, to connect with local audiences, in a connected world, the way that the message is ignited is also likely to be different.

A recent campaign of Coca Cola was a good example.

The ‘Share a Coke’ campaign was first started in Australia (originated by Ogilvy). Overnight, the much loved, but often overlooked, Coca Cola changed the logo on the bottles to 150 of Australia’s most popular names. It took the entire country by surprised.

The strategic thinking behind the campaign was that for a big global iconic brand like Coca Cola, people don’t find it ‘personal’ enough. The campaign was so successful that it was subsequently launched in markets including Brazil, New Zealand, Germany, Belgium, the Netherlands, Greece and the UK. This year, the China team (working with Leo Burnett Shanghai) adapted the campaign by applying local creativity. Instead of showing people’s names on the bottle, they put the very local and colloquial ‘nicknames’ that are fondly used by Chinese among friends. 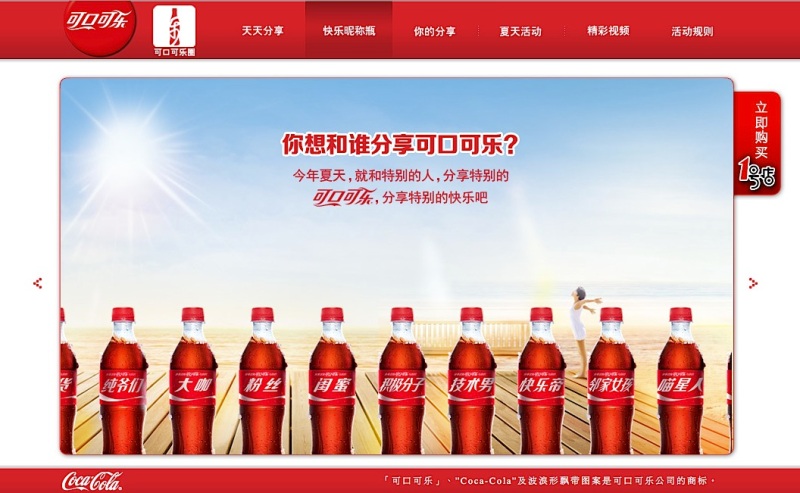 A quick recap on how the idea has been transformed in different countries:

UK: (similar execution for the Netherlands and Belgium)

The result is an authentic execution building on local culture and nuances. Not only did the idea travel, but they also managed to adapt it creatively for each local market, so that the consumers felt that the idea was created natively for them.

Each market also had their own way to connect with the people. In Australia, the campaign was activated by an interactive billboard at Kings Cross in Sydney, taking advantage of the digital technology and transfer people’s names instantly through SMS messaging. In China, widely recognised as a mobile-first market, an app was designed to facilitate sharing of the chosen ‘nickname’ to people’s friends via social networking platforms.

An app created for the China market:

Such creativity blurred the boundaries between origination and adaptation. I call it creative solutions.

This is the kind of creativity that every successful global campaign requires. Miles Young of Ogilvy Group commented recently that with budgets under pressure, clients aren’t prepared any more to have advertising developed in every one of those markets by local agencies. I also think that a shared brand vision globally can deepen the cohesiveness of the corporate culture internally and maximize the power of collaboration.